Is My Dog Too Fat?

A major recent study suggests that being just moderately overweight is deadlier for a dog than a lifetime of smoking is for a human being. Being just “a little fat” is simply horrible for a dog’s health. It is literally worse than smoking.

And being “very fat”? Well, it’s likely even worse than that.

That’s bad news for American dogs, because polling suggests that more than 50% of them are overweight or obese (but that only 10% of their owners are aware of it). This means if you pick a random dog on the street, it is more likely than not to be overweight.

It also means that, statistically-speaking, your dog is probably overweight.

But let’s ignore the statistical version of your dog for a minute and focus instead on the real version. Is she actually “too fat” or not? And how do you know for sure?

In my experience, this subject is fraught with misinformation. There are scores of well-intentioned folks out there who think they know what they’re talking about when they make judgments about the matter, but they usually don’t have a working knowledge of the relevant evidence. So they’re in no position to defend the validity of their own recommendations.

Fortunately for you, I’m here to help separate the wheat from the chaff. In this article, I’ve essentially summarized a particularly lengthy chapter from my book, one in which I review the existing evidence on canine body condition and explain the best way to determine whether or not a dog truly is “too fat” or not.

I hope you find it helpful.

Here’s the simple but surprising answer: no one (I repeat: no one) knows.

Why? Because, at this moment, there is precisely zero published scientific evidence on what constitutes an “ideal body weight” for any specific dog.

Seems impossible, right? After all, veterinarians, breeders, breed organizations, and self-appointed “experts” the world over never tire of telling us how much individual breeds ought to weigh. Surely some of their recommendations are based on valid evidence, right?

While AKC-recognized breed standards typically contain “ideal body weight” ranges, those ranges are based solely on the subjective judgments of the group’s leadership. And while those individuals tend to have plenty of experience being around specific kinds of dogs, there’s not a single case in history in which one has publicly defended his recommendations based on any kind of peer-reviewed health or longevity data.

And there are other reasons to be leery of “ideal body weight” recommendations too.

For one, breed standards don’t even claim to be about optimizing health and longevity in the first instance. Instead, they’re typically about defining the qualities that tend to “protect and advance the interests of the breed,” whatever that might mean.

Moreover, plenty of breed standards have been loudly criticized for promoting decidedly unhealthy physical traits. (See this New York Times Magazine article for a nice example.) In fact, there’s even published evidence suggesting that winning show dogs (ostensibly those that comply best with the body weight recommendations embodied in breed standards) tend to be a good deal fatter than they really ought to be, at least according to veterinarians.

(And, of course, plenty of dogs also don’t fall neatly into one breed or another. So millions of them don’t even have the benefit of breed standards to go by.)

But, most importantly of all, body weight just isn’t all that good a predictor of body fatness. There are plenty of weighty tissues in a dog’s body that have nothing whatsoever to do with fat. And there are plenty of lean, muscular dogs that are a good deal heavier than the weight ranges set forth in their breed standards suggest they ought to be.

So if body weight recommendations aren’t a reliable way to determine whether your dog is too fat, is there something better you can use?

Body condition scoring charts began coming into public view in the 1990s. Today they are the standard method by which veterinarians analyze canine body condition.

They sound a little complicated, but they’re actually quite simple. Essentially, they task the user with completing a targeted visual and tactile body part analysis in order to make some inferences about the overall nature of a dog’s body condition. In other words, all you have to do is look at and feel a few key parts of your dog’s body and you can reliably infer how much fat is in there.

Here’s the first and best-known version: 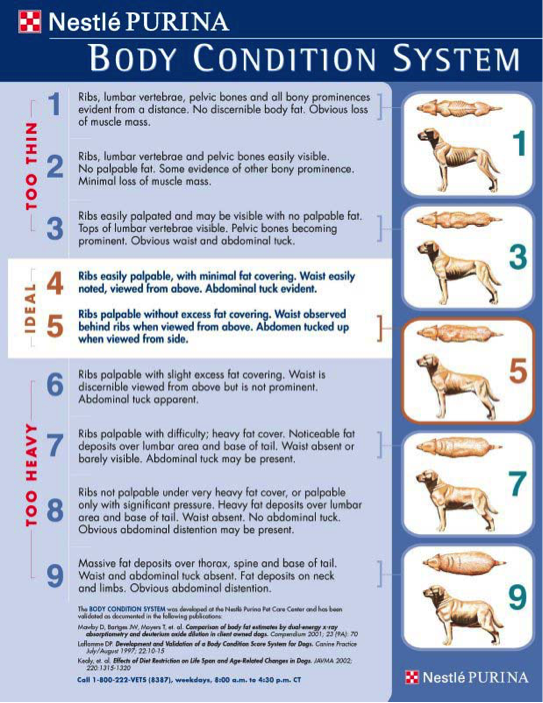 This particular system was created by a veterinary nutritionist working for Nestle Purina, but experiments definitively validating its usefulness and accuracy have been published in academic journals. It is beyond legitimate dispute that this system typically allows both experts and laypeople to make consistent, accurate judgments about the amount of fat in a dog’s body.

There are other examples (here’s my own crack at it), including at least one other that has also been validated through peer-reviewed scientific experimentation. But, generally-speaking, they all recommend the same thing: dogs’ bodies should be reasonably but not very lean, featuring (1) an “hourglass figure” (with shoulders and haunches that are somewhat wider than the waist), (2) an “abdominal tuck” when viewed from the side; and (3) ribs and skeletal musculature that are palpable.

Go ahead and give one a shot with your own dog. You’ll see that it’s very straightforward and takes no longer than about 60 seconds to complete. All good, right?

Not so fast. There’s a problem. And it’s an important one.

The problem is that the qualitative body condition recommendations (“ideal,” “too heavy,” “too thin,” etc.) made in even the most widely-used BCS protocols also are not based on any evidence. Do they seem reasonable at first glance? Sure. But a closer inspection of the research underlying them reveals that their authors (credentialed and well-intentioned as they might be) made no effort to cite evidence supporting their interpretation of what constitutes “too fat” when it comes to a dog.

I know this because I’ve read the studies (one was published in a tiny journal that isn’t available online, the other is linked above). I also interviewed the lead researchers on each one, just to give them all the benefit of the doubt.

Unfortunately, this research just confirmed the truth – the categories set forth in these BCS protocols were not based on a single, solitary evidentiary source. They amount to guesses made by their authors as to what is truly optimal when it comes to canine body condition, not any actual data linking body fatness to health or longevity.

What this means is we need to take one final step in order to understand what it means for a dog to really be “too fat.” We need to review the relevant evidence for ourselves.

What Does the Evidence Really Say About “Optimal” Canine Body Condition?

I’m going to do my very best to keep this short and sweet. (If you want the longer version, you can download a free copy of my book here.)

Most of the research into the links between fatness and health has been conducted on human subjects, where funding is far easier to come by than in the world of small animals. That body of research definitively shows that a U-shaped pattern governs the relationship between human Body Mass Index (a ratio reflecting the relationship of weight to height) and longevity.

For maximizing lifespan, the optimal BMI is almost always shown to be between 18.5 and 25.0. And it is undisputable that folks with a BMI either above or below the point of optimization tend to live shorter lives, at least on average.

But this is a curious pattern. Because the relationship between body condition and deadly chronic disease occurrence is not U-shaped. One’s risk of developing chronic diseases (including, at least, cardiovascular disease, diabetes, about a half-dozen cancers, Alzheimer’s disease, gallbladder disease, hypertension, and osteoarthritis) simply rises as one gets fatter. The fatter you are, the higher your risk. The leaner you are, the lower your risk. Period.

This latter pattern is exactly what we should expect to see, given what the scientific community knows about how body fat works. Over the past 25 years, researchers have discovered that fat tissue actively secretes substances called adipokines. And it’s those substances that cause chronic inflammation, and therefore disease. More fat tissue = more adipokines = more inflammation = more disease.

So why the U-shaped relationship between BMI and longevity? The answer seems to be that BMI isn’t a great predictor of body fat, at least not at the individual level. Some folks with low BMIs are scrawny (i.e., they have low levels of lean body mass), but not particularly lean (i.e., low levels of body fat). And scrawniness, it seems, is something that directly reduces one’s ability to combat deadly diseases (while leanness is not).

“The apparent U-shaped association between BMI and total mortality may be the result of compound risk functions from body fat and fat free mass.” (Paper here.)

“Our findings suggest that BMI represents joint but opposite associations of body fat and FFM [fat free mass] with mortality. Both high body fat and low FFM are independent predictors of all-cause mortality.” (Paper here.)

“These results support the hypothesis that the apparently deleterious effects of marked thinness may be due to low FFM and that, over the observed range of the data, marked leanness (as opposed to thinness) has beneficial effects.” (Paper here.)

The limited body of canine research is perfectly in-line with these studies of human subjects. We know that canine fat tissue produces inflammatory adipokines, just like human fat tissue does. (See here.) We know that dogs with an average body condition of BCS 4.6 will typically live several years longer than dogs with an average BCS of 6.7. (See here.) We know that markedly obese dogs tend to have higher chronic disease risks than somewhat leaner dogs. (See here, here, here, here, here, and here.) And we know that, in the few instances where a wide range of canine body conditions have been analyzed (as opposed to experiments where a group of fat dogs was simply compared with a group of somewhat less-fat dogs), the leanest dogs in the study typically have the lowest chronic disease risk. (See here and here.)

So what does this all mean for our BCS protocols?

If the BCS protocols truly reflected the realities of the data, they would simply say that leaner dogs are healthier dogs, full stop. That, so long as muscle mass remains normal, there’s no such thing as a dog that’s “too lean.”

And, in a way, that’s good news for you. Because it means there’s a very simple answer to the question “is my dog too fat?”

The answer to that question is simply yes.

According to the best available evidence, so long as your dog is maintaining normal amounts of muscle tissue (and is not already in the clutches of a deadly chronic disease), the leaner she is, the healthier she is likely to be. Period.